This perennial fresh water lake, nestled among wooded hills, is the only one of its kind in Kerala. A fresh water aquarium with large variety of fish is an added attraction. Tourists can also avail of boating facilities, children’s park, and a shopping centre for handicrafts and spices.

The two caves are located at a height of 1000 metre on Ambukutty Hill near Ambalavayal. The New Stone Age pictorial writings on the walls of these natural caves at Edakkal are evidence of the civilisation that existed in Wayanad in prehistoric times. The caves can be accessed only by a 1 km trekking trial from Edakkal.

Lakkidi is the gateway to Wayanad. It is situated 700 metre above mean sea level, at the crest of the Thamarassery Ghat pass. Luxuriant forests, lofty peaks, gurgling streams and a good number of monkeys on both sides give thrill to the journey up the winding roads to this hill station. The 12 kilometre long journey through ghat road with nine hairpin bends amidst thick forests is a challenging experience.

Rare species of birds can be sighted from the watch tower of this bird’s sanctuary. This place can be accessed only by trekking.

The Kuruva island is a 950 acre of ever green forest lying on the tributaries of east flowing river Kabani. It is an ideal picnic spot, far away from the disturbance of city life. The island is uninhabited. Rare species of birds, orchids and herbs are found here.

King Pazhassi, known as the “lion of Kerala”, who organised guerrilla type warfare against British East India Company, was cremated in Mananthavady in 1805.

Thirunelli is situated north-east of Mananthavady under the Brahmagiri hills in the reserve forests. The Temple is a marvel of temple architecture. The shrine is shielded with 30 granite columns and the ground is paved with huge square pieces of granite. The crystal clear waters of the Papanasini river running downhill add to the enchantment of the place. Pakshipathalam, an interesting trekking centre, is 7 kms. away from the temple

Thick forests covering an area of 345 sq. kms form the Muthanga Wild Life Sanctuary – the biggest aboad of wild animals in north Kerala. Elephant, spotted deer, bison, tiger, cheetah, wild bear, etc. are found in this sanctuary. The forest department has facilities for providing elephant rides to tourists. Muthanga, which is 16 kms east of Sulthan Bathery, is located very near to the Karnataka boarder.

At 2100 metre above mean sea level, Chembra is the highest peak in Wayanad and is an ideal area for trekking. Climbing this peak is a challenging endeavour and would take a full day.

The waterfall at Soochippara near Meppadi is really a treasure of nature. The stretch of waterfalls ranging at places from 100 to 300 feet height is a treat to the eyes. The pool below provides for water rafting, swimming, bathing etc.

This is the largest earth dam in India. The topography here is such that many islands will be formed in the upstream of the dam when the dam is full. These islands with the background of the Banasura hill will provide an enchanting sight to tourists. Boating facilities are available here.

The Irupu Falls are located in the Brahmagiri Range in the Kodagu district of Karnataka, India, bordering the Wayanad district of Kerala. It is a fresh water cascade and is situated at a distance of 48 km from Virajpet on the highway to Nagarhole. The Falls are also known as the Lakshmana Tirtha Falls, derived from the name of the tributary of Cauvery which starts from these falls, the Lakshmana Tirtha River.

Karapuzha Dam located in the Wayanad district of Kerala, is one of the biggest earth dams in India. Karapuzha Dam is located in the greenish and natural regions of Wayanad, Kerala on the Karapuzha River, a tributary of the Kabini River. Construction on the dam began in 1977 and it was complete in 2004. The purpose of the dam is irrigation and it left and right bank canals are still under construction.

Thusharigiri Falls is a waterfall located in Kozhikode district in the Indian state of Kerala, India. Two streams originating from the Western Ghats meet here to form the Chalippuzha River. The river diverges into three waterfalls creating a snowy spray, which gives the name, 'Thusharagiri'. The word Thusharagiri means the snow-capped mountain. Of the three, the highest waterfall is the Thenpara that falls from an altitude of 75 metres (246 ft).

Small waterfall with a shallow pool popular for swimming, family picnics & natural scenery. A beautiful waterfall situated about 22 km away from Kalpetta. Smaller than the Sentinel Rock waterfalls, the Kanthanpara Falls and its surroundings make an ideal picnic spot in Wayanad. 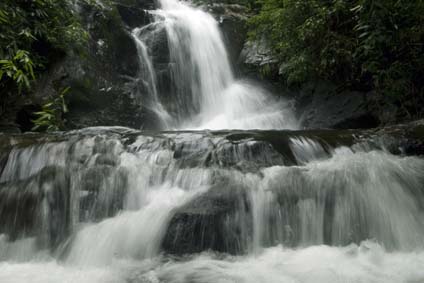 Phantom Rock (Cheengeri Mala) is a renowned place that is as unique as its names. It's an archaeological wonder that can be hardly spotted anywhere else in the world. The rock is naturally casted in the shape of the phantom skull and hence is famous by the name of Phantom Rock all over the world.The picturesque place is 26 km away from Kalpetta and can be reached by trekking on the narrow lanes. Like other places of Wayanad, Cheengeri Mala is also one of the favourite spots for trekkers and hikers. The picturesque rock is standing tall at an elevation of 2600 m above the sea level and is surrounded by the lush greenery; it's a picture perfect place for those who are looking for peace and solitude.

Wayanad Heritage Museum, also known as Ambalavayal Heritage Museum is a museum at Ambalavayal, 12 km south of Sulthan Bathery, in Wayanad, Kerala, India. It is managed by the District Tourism Promotion Council. The Museum displays tribal relics and artifacts. Four sectors of the museum—the Verasmruthi, the Gothrasmruthi, the Devasmruthi, and the Jeevanasmruthi—house different types of items ranging from the Neotholic age to the 17th century, including artifacts from ordinary tribal life, decorated memorial grave stones once used to adorn the graves of heroes, and terracotta figures.